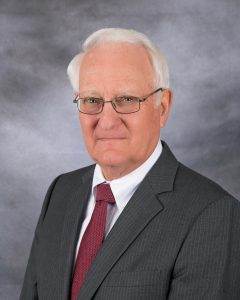 Robert A. Easter is President Emeritus of the University of Illinois after serving as the University’s 19th president from 2012-2015. He was interim Chancellor from 2009-2011, serving as chief executive officer of the 42,000-student campus, and also served as interim Provost and interim Vice Chancellor for Research.
From 2002-2009, he was Dean of the nationally ranked College of Agricultural, Consumer and Environmental Sciences. Before that, he served as Dean of the Department of Animal Sciences, where he has been a faculty member since 1976.
Easter has co-authored a book on livestock production and has written more than 90 peer-reviewed articles, 11 book chapters, and numerous papers for conferences and industry publications. He also has spoken to audiences in the U.S. and 30 foreign countries.
In 2006, he was appointed by President George W. Bush to the Board for International Food and Agricultural Development (BIFAD), and was appointed as chair of BIFAD in 2007. He is a Fellow of the American Society of Animal Science and an Honorary Member of the American Society of Agricultural and Biological Engineers and holds an Honorary Doctorate from Iowa State University.
Reared on a grain and livestock farm in southwest Texas, Easter earned a doctorate in animal science at the University of Illinois in 1976 and joined the Animal Science Department as an assistant professor.